Is there such a thing as developing resistance to Imodium? We know people develop antibiotic resistance but diaherral medicine?. I suspect Avi and I may be on the verge of it. More on that in a few but first a few words on the race and on the state of the machine.

Day 13 was yet another bruiser. It’s almost as if the race organizers decided to take off their gloves and throw everything at us to see how many more fall off the grid. And I mean everything. It included high speed races on long country dirt road full of giant potholes and deep ruts, racing instructions for blind turns in regularity sections that had to be correct to 5 meters, and killer average speed on dirt roads. All of this created a virtual mutiny by some of the older vintage car drivers who just gave up midway after seeing their cars get battered. In apparently a first, the organizers apologized to the drivers for adding such a demanding section. 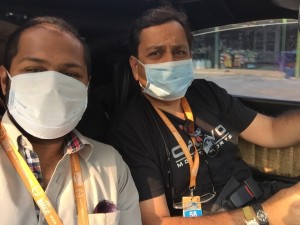 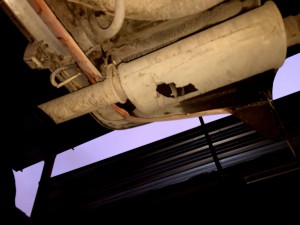 With dozens of cars broken down, retired, patched up and hobbling along the road to Burma, our Datsun is holding up bravely despite being badly bruised. The list of her ailments is very long.

The serious one we are worried about is a suspected bent trans-axle and a warped frame that makes her vibrate violently at high speeds and prevents the doors from opening respectively. Some of the vile potholes may have taken a revenge and warped the car’s frame when we hit it too hard. As a result, Avi may soon be entering the navigator side through the window just like they do in NASCAR. smile emoticon

In addition, her exhaust developed a hole the size of a baseball due to rock puncture. This led to an evil sounding car that would have made fans of Tokyo Drift go wild but on the down side fills the insides with carbon monoxide on occasions. Not a good thing as you chemistry majors would know. Finally, our wheel bearings got loose and the wheel calipers were bent resulting in extreme brake squeal that sounded like Yoko Ono singing karaoke to one of Axl Rose’s songs.. nasty stuff.

The wobbly axle that shakes the car at high speeds and during a race makes our internal organs feel like they are being blended in a Cuisinart. We can take the beating and muscle soreness if it were not for a horrible side effect. You see all the movement stirs up the many parasites, yeasts, and bacteria that have made our gut home thanks to the past 12 days of gorging on local food stalls, road side restaurants, and farmers markets. Put another way, if there was ever a UN of International stomach bugs, our stomachs would be its headquarters.

The results are worrisome to say the least.. Avi and I have over the past two days noticed an increased amount of rumblings and resistance to doses of Imodium. In the past the routine was simple.. Step 1: eat a questionable food (partly cooked meat, questionable origin meat, unwashed fruit, open container drink etc) Step 2: pop in an Imodium and Step 3: watch results within minutes and say thank you to modern medicine and over $400B of US Western Pharmaceutical R&D budgets.

This pattern is beginning to change ever so slowly. We are now having to double the dose and give each other that “are you ok to keep driving or do you need a pit stop?” question at a greater frequency.

We now have two choices: a) give the car a break and not push it harder so we get to finish the race in Burma and in turn get the tummy to settle a bit or b) it DEPENDS. I literally mean it Depends.. as in the adult diapers. There is no shame in discussing the real option of continuing to drive fast like a Banshee but put on Depends incontinence diapers so we don’t lose time in pit stops. After all Astronauts do it, Le Mans Drivers do it.. so why not a couple of crazy Texenas (Saxenas from Texas)? Avi and I discussed that topic for a few minutes today but decided to punt it for tomorrow.. Valentine’s Day.

Final words on the race. We had a great day today.. had a super section that was semi-graded and we went hard at it. But for one turn where I took a part of the bamboo jungle with me as a hood ornament, we were perfect. Avi is an exceptional navigator and his call outs to me today where he essentially “paints the road ahead in my mind’s eye” were near perfect. He did express his displeasure once when I went too hard in a very diplomatic “Bhaiya, for the record your driving style right now is not consistent with our philosophy of preserving the car”. Ever the smooth talker, he got me to lift off the gas a bit and we made it through without getting into any additional ditches. 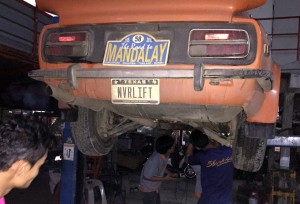 d this is the best they can do we were told). The surprise of the day was when all 140 odd race participants started singing “Happy Birthday to you” to me and brought out a cake with 50 candles that I immediately rushed to put out so as to not risk the fire alarms and sprinklers from going off. 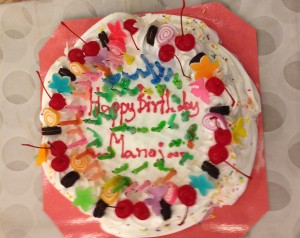 It was very touching to see a cake brought out with your name on it. It was also very touching to hear 100+ people from over 30 countries sing Happy Birthday to you and, right on cue, butcher the pronunciation of your name in unison. All in all, Day 13 was yet another good day on The Road to Mandalay.