“The beatings will continue until the morale improves”… if cars could talk this is how they would describe the day we just completed. Let me explain.

Our drive north and east out of Chiang Mai after a day of rest involved a very technical route to a small city called Mae Hong Son. The 365km route took us through thick forests rich with Elephants and Tigers. Bordering Burma, Mae Hong Son is also called as “The City of Three Mists” and was used historically as a source of wild elephants that could be used in war.

Our first time trial was very aptly named the “Tiger Wood”. It was a mix of tarmac and gravel up and down a winding road on a jungle covered mountainside with sheer drops. Made for a lot of adrenaline rush especially when we missed one turn on a cliff and tested our skills and some other body parts that are best not listed in a family oriented blog. 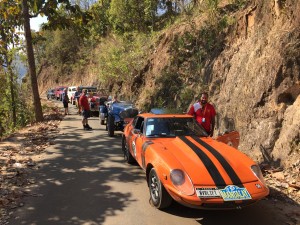 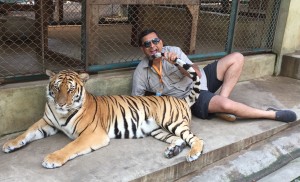 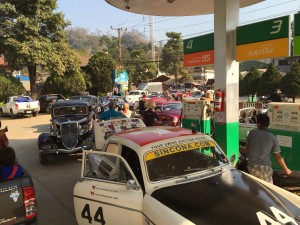 At the end of the time trial we were rewarded with a visit to a Tiger resort of sorts where Avi and I promptly agreed to get into the enclosure with the biggest Tigers they had. I have been meaning to explain how my venture fund has the Tiger by the Tail and this gave me a photo op to get that point across. It helped assure us greatly when the person handing us the tickets said “oh don’t worry they just had breakfast so they will likely not eat you”. With that reassurance from a 14 year old kid, we stepped into a 100 foot by 200 foot enclosure with 5 of the largest cats I have ever seen.

As I normally do with high-risk settings, I studied the overall situation and two things stood out. One, each of the five tigers had it’s own minder and each had a “personal tree” with a high voltage electric fence wrapped around the tree trunk. It was clear that only the minders, not the tourists, knew how to climb the tree should the tiger have a bad day or wants a change of menu on his breakfast. I decided to keep that little fact from Avi who was merrily studying the angles to take his pictures from. The second interesting fact was that the entire enclosure was in a 10 feet deep moat surrounded by a gift store and cafeteria full of tourists looking down upon us with videos rolling and probably thinking either “and you paid money to get into this???” or just “look at those idiots!”. My mind was having a hard time staying away from parallels to the scene from Gladiator when Christians are fed to lions in the arena. I promptly tuned my mind to visions of a Glade air freshener commercial with kids chasing butterflies bare feet on green grass.. that seemed to alleviate the concern a bit.

The actual experience with the Tigers was not that big a deal. It will just help bore people at parties and irritate a few others on Facebook by putting up pictures (which I shall promptly do this evening). Narcissism thy mantle is Facebook.

Returning from the Tiger Woods, a guy who can be best described as the Thai version of Johnny Depp (check it out yourself) approached me. 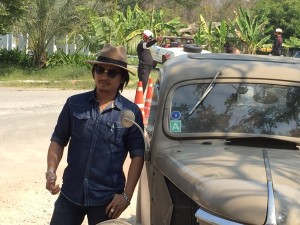 He was very insistent that I pose for a picture with him in front of a car that was not mine. I tried to mime my way out of the situation but the bugger would not let go. Recognizing that we are now in fairly “wild” country, close to the Burma border and in midst of “tribal” people who carry a machete like we do swiss knives, my self preservation gene kicked in. I gave him his picture and promptly took a picture of him as well in front of a car he still thinks belongs to me. 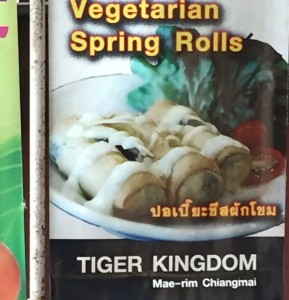 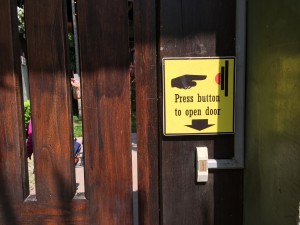 Post lunch we got on the road to Mae Hong Son which is technically a loop referred to by local bikers as “the road of a thousand hair pin bends”. And the Thai are not kidding when they name it such. In fact, at the end of the 315km drive we even got a certificate indicating we traversed 1,864 bends. Never one to hold on to certificates, I am going to retain this if nothing as an ode to my sore arms and neck. My calf muscles are still throbbing from maneuvering those bends some of which dropped as much as three stories in a single turn. 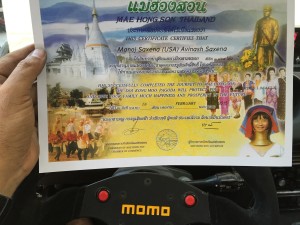 Needless to say this wrecked havoc on the cars and many were found on the side of the roads being nursed by their worried drivers and navigators. We had a few moments of our own but good old Datsi made it through. We did replace our fuel pump yesterday but found out earlier today that our rear left shock absorber was broken. I tried not to take it personally that the broken shock absorber was on the drivers side and tried to dispel any thoughts about my weight having anything to do with it. Speaking of weight, I must have lost at least 8-10 pounds in the last 16 days. A good thing but a far more expensive option than Jenny Craig.

What made the day’s journey worthwhile was the excitement that we were approaching Burma and will soon be entering it as the inaugural delegation after the country opened its borders. Kind of like a “modern day Marco polo” is what my inflated sense of self told me. The drive also made for intriguing views as we sped past the lush, jungle covered countryside with people tough as nails.

There were moments Avi and I wondered if Rambo would pop out of the next turn sweaty bandana, bazooka and all and ask us “Is if safe to come back states side? Did Sarah Palin win?” The presence of what seemed like an entire Thai Army platoon guiding traffic and saluting us as we were making the way through villages brought up those Rambo images even more.. or maybe it was the sun and dehydration. We will never know as we complete yet another adventure filled day on The Road to Mandalay.