Today we came frighteningly close to losing it all. It was the day that could have ended our run and seen the car on a flatbed truck on its way back to Austin. And it was all because of driver error – an error of emotion and judgment and not just skill.

It all started with a simple review of the race notes for the day outlining the racetrack and timing as we covered 394 km from Mae Hong Son to Mae Sot. As they do with every time trial, they gave this one a name. They called it “Thai Decider” in a reference to the fact that this was going to be our last race in Thailand. This as you will soon find out was the source of my undoing. 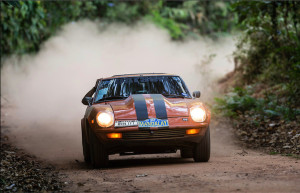 Fast forward ~90 minutes and picture us horror struck trying to slow down a racing car with thick green smoke billowing out of the engine and gauges going haywire on the dashboard. We had started the race few minutes earlier when the Race Marshall came up to Avi and took him through the timed route and the condition of the track. I heard him say clearly “track is pretty straight forward but watch out for some very nasty ditches and pot holes here, here and here.” He even made him sign a document like they normally do for tracks with severe care or caution is required (insurance requirement I think). 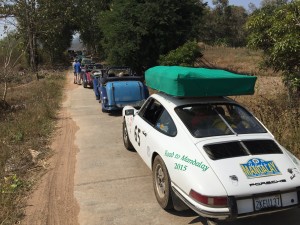 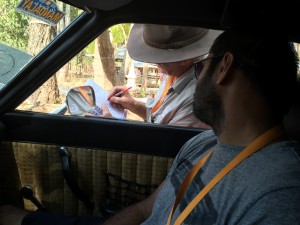 Avi promptly repeated the conditions back to me, I processed it and said “yep” and we agreed to do a 60% push factor (a reference to our agreement earlier day that we will preserve the car so we can get into Burma and finish the race). I then pulled up to the start line and something strange happened. I morphed. I decided to completely ignore Avi’s instructions, floored the accelerator and took us on a ride from hell going across and over bumps, turns and pot holes that the car was not in any shape to tackle.

After about 4 minutes of taking a heavy beating, we saw dark green smoke pouring out of the engine and nursed the car to the finish line. We examined a completely empty radiator and a red-hot engine that we waited to cool down all the while hoping that the damage was not permanent. As we were waiting I started reflecting on what just happened and why I chose to ignore the warnings. Why did I do this I asked myself? Why did I not honor the race plan and ignore the warnings? 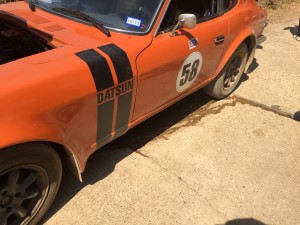 As I dug into my psyche it dawned upon me that it had mostly to do with how I processed the title on the Tulips for the segment of the day: “Thai Decider”. (Tulips by the way are “pace notes” which are read by the co-driver from a book while the two drive as fast as possible through a closed section of road called a “stage.” Get it right and you fly down roads you’ve never seen before. Get it wrong, and not only is your day over, but your car is probably totaled as well). 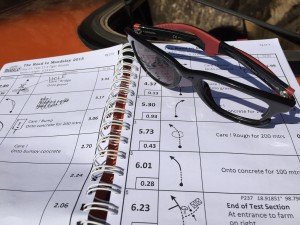 Being the last race in Thailand, the organizers gave the time trial a clever name. I subliminally had locked on to those two words. Given the setbacks with ditches and broken fuel pumps of the past 15 days, the competitor in me wanted to “dominate” this last race so I can tell myself and show others that “we have the fastest car and the biggest ___”. I was tired of doing well but never winning any segment outright due to various car troubles (in the last 15 days, over 2/3rd of our car has been either fixed, replaced or modified in someway due to the beating it had taken. The door frames were bent, shock absorber broken, exhaust punctured, fuel pump failed, suspension fixed, steering realigned, radiator modified, distributor cap fixed, brakes replaced, gearbox and transmission flushed, fuses blown, lights replaced and on and on.. )

Fortunately we found out after an hour that our issue was that the radiator hoses had broken due to the severe rattling of the engine and the green smoke was a result of the fluids going up in smoke. The engine was damaged no doubt but functional still.

As I heaved a sigh of relief, I reflected on the “lessons” with Avi later in the day, three of them stood out which I wanted to blog about today:

#1. IT’S NOT HOW FAST YOU DRIVE; IT’S ABOUT HOW YOU DRIVE FAST
Races are won not on the straights but on the corners and on the pothole-ridden sections — much like life. Therefore it is important to have a studied plan about the car and the track to skillfully maneuver the twists, turns, and bumps that come your way.

In my rush to win the segment my mind did not “see” the massive potholes and ditches and it did not match the studied judgment of the navigator and race marshal against the battered condition of the car. I willfully ignored to heed to Avi’s instructions on track conditions leading to what could have been a catastrophic failure. Many other cars which were older and driven by relatively less skilled drivers finished the race just fine by skillful handling of the challenging sections. They drove fast the right way.

#2. KNOW YOUR LIMITS BUT DON’T BE LIMITED BY THEM
To achieve anything in racing (and in life) you must be prepared to dabble at the boundary of disaster. However, the boundaries of the car, the driver, and the track need to be first examined carefully and then a proper plan devised to test them and push them.

In my zeal to win the “Thai Decider” and make a statement to the other participants, I decided to treat the limits that were being read out to me as evil and dirty and chose a brute force approach vs one based on studied judgment. Sometimes knowing and navigating the limits and boundaries are actually the key to our success. Nothing limits you like not knowing your limits.

#3. WINNING HAS NOTHING TO DO WITH THE TECHNICAL PARTS OF RACING
Winning matters. But winning a rally race is less about going fast but has more to do with the struggle and effort and optimism. It is about purpose, focus, and about building resilience to recover from setbacks. It’s not really about the competition. Your biggest challenge in a race, as in life, is yourself.

Many of the winners in this epic race will be folks running an 80 year old Ford Model A with 40HP motor. They may take 4 hours more than my time but they will cross the finish line much like Avi and I will. When I spoke to the veteran competitors and asked them about their “winning strategy” every one of them had a variant of the same advice “It’s a long, long race. The winner isn’t the one with the fastest car, it’s the car that endures and the driver who refuses to lose”. “You gotta be in it to win it so preserve your car” said another.

Good lessons all to learn and to live to fight another day and go for the win. One of my favorite quotes goes “Life is not a journey to the grave with the intention of arriving safely in one pretty and well-preserved body…but to skid in broadside, thoroughly used up, worn out, and defiantly shouting “wow, what a ride.” This nut behind the wheel learned some significant lessons today in how to skid properly in broadside.

Onwards and upwards on The Road to Mandalay!