After three years of planning and anticipation we finally crossed over into Burma on Day 20. Simply put, Burma is an anthropologist’s heaven. It is a time-trapped cocoon of ancient customs and civilizations. Check out the end of this section for a quick history on the country.

With the recent changes within Myanmar, our event is seen as ground breaking by the Government, bringing rally-drivers from all corners of the globe to their country with a physical crossing of their border in a demonstration of how Myanmar is opening to the rest of the world. Rarely does a car-rally contribute to international relations but we were playing a part in the opening Burma with the rest of the world and that added to the sense of excitement. 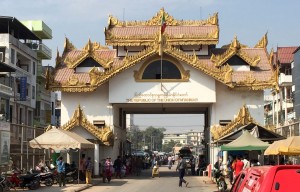 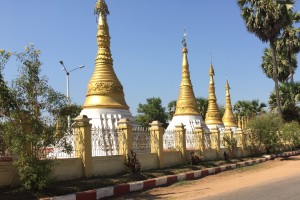 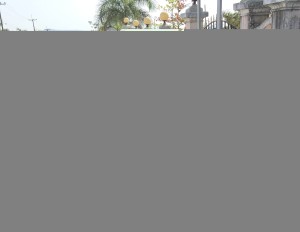 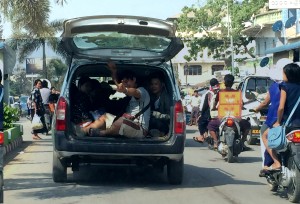 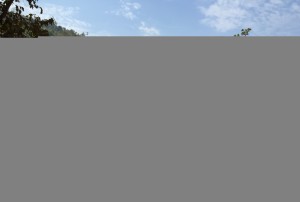 We were also bracing ourselves to negotiate a heavily pot-holed road in “no man’s land” between Thailand and Burma, and then negotiate a steep descent down the side of the mountain where two-way traffic is not possible – traffic flow is governed by one day being for driving up, and all traffic at the top waits for the next day, when it’s all traffic driving down. This works, most weeks, until a truck breaks down and then the planning and the calendar is thrown into confusion. A long line of gasoline tankers was lining up at the frontier, but they were going to be sidelined in order to give the rally priority.

A last-minute change of plan by the Burmese authorities allowed us to be the first to use a brand-new tarmac road, which will be the new link to Thailand. The good news was our badly beaten up cars did not have to negotiate large craters and inch our way down a precipitous decline but the bad news was we clearly lost part of the adventure of Burma. All illusions about loss of adventure were put to rest on our drive into Mawlamyine the fourth largest city of Burma and then to Naypyitaw or “new city”, constructed as the seat of government.

Known as Moulmein to the westerners, Mawlamyine is called out by Rudyard Kipling in the first line of his poem “The Road to Mandalay”. It goes “By the old Moulmein Pagoda, lookin’ lazy at the sea, There’s a Burma girl a-settin’, and I know she thinks o’ me;”. I asked Avi to not take that line seriously about a Burmese girl waiting for him and focus on his navigation and co-driver duties.

The best way to describe Burma is not through words but through a set of vignettes. It is not a country but a time machine that teleports you from place to place as you drive across this scenic nation. Right after we crossed the Thai Border into Burma the Time Machine got to work. We were hit by a cacophony of sounds from tuk-tuks with loudspeakers blaring everything from the latest Buddhist chants to the newest political grievances. I may have even heard the great Poet Britney Spears somewhere in the mix. This was accompanied by loud and frequent motor horns that people here use in tandem with blinkers and brakes to complete the driving ritual.

As we were just getting used to the sounds, we were assaulted by the smells. Aroma of food being sold on the sidewalks along with fermented sugarcane being transported across the border. Soon thereafter we were hit with something very depressing visually. We saw grown ass men wearing ankle length skirts and walking around casually. They seemed to want to compete with the women who, being the more considerate and forgiving of the sexes, were trying to ignore the fashion faux pas. Check out the picture if you don’t believe me.

All of this brought back vague feelings of familiarity and nostalgia until it hit me.. Burma looks like what India might have looked like 50 years ago.. sans the fashion issue although we have been known to hold our “lungis” quite well in the South.
Using this new found insight, we started bragging and giving advice to the rest of the worried contestants on how to survive Burma. Believe me, being Brown skinned, owning a wicked fast car, and speaking with a sense of authority and confidence about foreign things to white people has extreme power. And they ate it up while we cashed in our exalted position as “Burma experts” by having them order us drinks as we regaled them with our tips and tricks.

All that resemblance to India lasted for about 20 minutes until after we crossed the Thai-Burma border. As we kept driving deeper into Burma, we felt as if we were being teleported through sets of various movies: from Mad Max to Indiana Jones to The Last Emperor. Let me explain.

First up: Mad Max. The cars, trucks and tractors we saw on the road seemed to have been left behind by the film crew of Mad Max: Beyond Thunder Dome. Tina Turner was the only thing that was missing as was the racially sensitive Mel Gibson. We saw trucks with no bumpers or hood but just giant engines and flywheels jutting out and chugging out smoke like some weird steampunk contraption. They were accompanied by open top tractors shells with a wheelbase of 20 feet or more that were bouncing around with people in it. They seemed to float like the podracers from Star Wars. Except the drivers were not as ugly and it was not the Mos Espa circuit on Planet Tatooine in Star Wars.

Next, we passed a mile long Burmese army truck convoy against a backdrop of hundreds of Pagodas which was right out of an Indiana Jones movie. We even had one of our classic cars with a radiator mark that looked like an Axis military emblem run in front of the convoy to complete the shot. This was soon followed by an equally surreal scene of a long line of hundreds of monks walking single file on the side of the road and boarding what seemed like trucks sponsored by the political party. The monks ranged from five year to 80 years in age and had this serene look about them that was rather hypnotic. Given the long history of army and monk confrontations in this country it was hard not to worry a bit about what was likely to unfold. 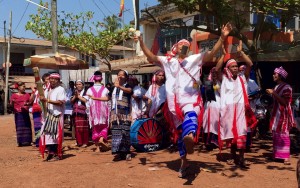 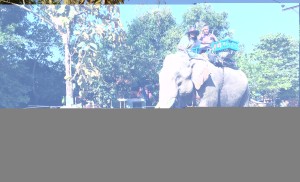 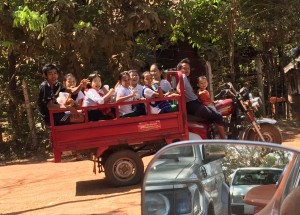 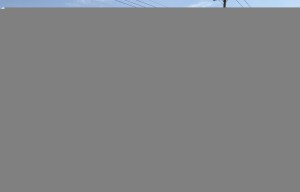 This convoy of army trucks and the monks led to discussions about “Pagan” and caused a stir with some in our group. As context, the locals call the city of Bagan as “Pagan”. Like with parts of the Middle East, the Burmese have trouble with their Ps and substitute a P with a B. (I still have vivid memories of ordering a “Bepsi with Bizza” while in Dubai many years ago and hoping that I did not rattle off the names of a local Belly Dancer and her Bouncer boyfriend). This Bagan vs Pagan descriptions startled the few Catholics amongst our group who were not interested in visiting Pagan sites. I told them “that’s ok, you don’t have to go. Just know that Pagans have Rites too and they apparently have better sects” That seemed to get everyone on board J We race into Bagan on Day 24 ie. Feb 24 so look for some great pictures then… and a whole lot of happy Catholics.

The last surreal vignette about Burma had to do with the drive to Naypyitaw or “new city”, constructed as the seat of government. After tackling brand new highway at the border the rest of our drive yesterday was on very tough pot hole fileld roads. The route to Naypyitaw however was a complete contrast. It was a deserted concrete “Express Way” with 10 lanes and hardly any traffic. 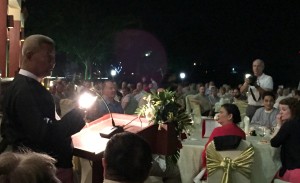 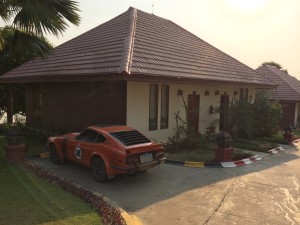 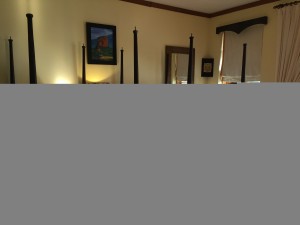 After almost 300km of the Expressway, we entered a brand new city that can be best described as something a Chinese contractor would deliver if they were asked to build Orlando today. We passed row after row of massive multistory hotels and resorts. The contrast between what we saw in the countryside a few hours earlier and the opulence and scale of these edifices was hard to comprehend and right out of scenes of the forbidden city in The Last Emperor.

We wrapped up the evening with a great outdoor sit-down dinner with senior Burmese ministers in attendance. They gave eloquent speeches about the Burma of the past and the Myanmar of today and how they believe land-based excursions such as this Rally will bring Myanmar closer to the rest of the world. We certainly hope so as this country and its beautiful citizens have much to offer to the rest of the world in terms of culture and heritage.

History:
The Nation we know as Burma was first formed during the 11th century and is now called Myanmar. An important King called Anawratha united Burma under his monarchy. He looks like “The Dude” in The Big Lebowski for his fashion sense of wearing something that looked like a bathrobe (an expensive though). The great King’s belief in Buddhism led him to building the temples and pagodas for which the nation and in particular, the city of Bagan is renowned. More on Bagan in a few.

The vast money and effort poured into pagoda construction by successive kings weakened the kingdom and Kublai Khan and his Mongol hordes swept through Bagan in late 12th century, hastening Myanmar’s decline into the dark ages. Not much is known about the centuries that followed. History picks up again with the arrival of the Europeans – first the Portuguese, in the 16th century, and then the British, who had already colonized India and were looking for more territory in the East.

The British made Burma a province of India in 1886 and brought in Indians to fill government jobs and the business interests of Indians and Chinese in Burma were encouraged, which bred resentment in many Burmese people. The Burmese also resented the Indian accent and the sideway head nods they had to adopt to communicate with their new Indian overlords and many became monks so they did not have to speak/communicate (just kidding!).

Anyways, after WWII, Burma experimented with democracy, then got into some socialist model, and subsequently a left-wing army takeover that led to martial law. In the last few decades the charismatic Aung San Suu Kyi, organized an opposition party, was awarded a Nobel Peace Prize and now a Member of Parliament.